Nancy Barr and her Michigan Mysteries 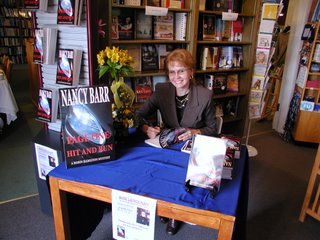 Thanks for chatting with me, Nancy. In your first book, Page One: Hit and Run, your detective is a reporter; you yourself are a news editor. Are you following the writerly rule of "Write what you know?"

First of all, thanks for the opportunity to prattle on about my book.

As for writing what I know, you're assuming I know what I'm doing at the newspaper.
;-)

Without a doubt, the main character, Robin Hamilton, is loosely based on me and my experience as a police reporter at a small newspaper. I'm not that spunky and I hate confrontation, but I do have a sarcastic side and love animals, which is why I gave her Belle, a basset hound, for a sidekick. The characters that populate the fictional newspaper staff are an amalgamation of the many talented people I've
encountered over the years.

You have three cats whom you describe as "magisterial." What is it about cats, anyway? Mine must have descended from the same royal line.
It was those Egyptians that ruined the species, if you ask me. All those monuments and statues and nonsense about them being descended from gods went to their heads and now they won't listen to a thing us lousy humans say. Three years ago I opened the door to my first cat, a 3-month-old gray and white tabby that someone found under the hood of a car. He had big green eyes and a cute little pink nose and knew a sucker when he saw one. He established his reign over the household within a week and is now the size of a small foreign car. I was eventually coerced into housing two of his minions and the three of them have reduced my living space to a very small corner of a bed for sleeping and my food a tiny serving of bread and water each day, as most of my budget goes for the best cat food money can buy, kitty litter purchased by the ton and only the finest medical care. Lesson? Want a pet? Get a goldfish!

Tell us about Page One: Hit and Run (the first chapter of which is viewable at www.nancybarronline.com )
This book evolved from my daily walks around Escanaba when I was living there. I used to walk five miles a day, some of that through Ludington Park, a long strip of land that borders Lake Michigan. When I felt ready to begin writing a novel, I played the "what if" game and pondered what would happen if someone well known in town were run over by a truck in the park while taking his usual morning stroll.

A few things make this book unique besides the setting in the modern-day Upper Peninsula of Michigan. Robin is an extremely independent young woman, independent to a fault. She's not good at asking for help, yet she has a soft side that makes her vulnerable. She doesn't own a gun, she doesn't swear much and she's small in stature. Her mind is her weapon. The cynicism that plagues most reporters hasn't corrupted her to the point where she has little empathy for victims and bad guys alike (a very real occupational hazard for journalists). I also explore the father-daughter bond, very strong in this case as Robin's mother died when she was quite young.

You have written that you write "to retain your sanity." Can you expand on this?
It didn't work. My sanity is now a distant memory as I try to juggle a very stressful full-time job that pays the mortgage, a fun full-time job that drains money and time, a long distance relationship with a very patient, understanding, kind man and the aforementioned feline entourage.

Seriously, I have a wild imagination and a tremendous amount of creative energy. For me, writing "calms the voices in my head." From the time I was a small child I've had these imaginary conversations and situations playing out in my head. Some of it is junk, but some is actually worth recording. That's where fiction-writing comes into play. It's a way to discipline that energy and focus it toward something worthwhile that others might enjoy.

Your bio says that you went to a high school where you were "alternately ignored and teased by nearly everyone." This makes me want to go there and get revenge on your behalf. Do you think high school, which is notoriously painful for almost everyone, shapes writers' future content?
Thanks. I could have used someone sticking up for me. I just kept my head down and wept softly into my locker. Sniff-sniff.

Actually, I don't think that had much of an impact on my writing. Writers are an eclectic bunch to begin with, i.e. we're "different" and different is bad in high school, where the herd mentality rules. I was a target of the "popular" crowd because I didn't dress right. The "party" crowd hated me because I was a geek who preferred reading a stack of books to getting puke-your-guts-out drunk at some guy's camp on weekends. I would tell any kid struggling with their social status in school to hang in there because the world will come to appreciate you for your weirdness,if you use it for good, Grasshopper.

You've come a long way, baby. Your house overlooks the Portage Lake Shipping Canal in Houghton, Michigan. Is this a nice view?LOL. It just occurred to me that it sounds like I live near an industrial waste site! Yes, it's a beautiful view. The canal resembles a wide, calm river. Across from me is a tree-lined ridge. Believe me when I say there isn't a bad view on the entire Keweenaw Peninsula (the rabbit ears of Michigan's Upper Peninsula, the Lower Peninsula being the mitten).

You refer to yourself as a hermit and say that people have called you eccentric. Does this make it difficult to emerge for book signings?I thought I would hide, quaking in fear, under the table at my first booksigning, praying someone would buy my book without me having to say anything. The reality was that five minutes into it, I was having the time of my life, laughing and talking with people about books, authors and the craft of writing. I now look forward to each event because it means connecting with people who love books. What a great job! It's helped that each of my signings and talks so far have been well-attended, thanks in large part to the subject matter. People in the Upper Peninsula like a good story as much as anyone, especially when it's written about places they recognize and by someone who understands and lives with them.

What are you reading right now?
Good Lord! That question would take all day to answer. I'm one of those crazy people who reads at least half a dozen books at a time. (I think it stems from my commitment issues that began when ... oh wait, this isn't my online therapy group, sorry). A book or two is handy at each of the tables in my house where I might happen to settle down with a cup of tea. Right now, Stephen King's "Dreamweaver", a mystery called "Strawberry Moon" by Robert Underhill and "Battle Cry of Freedom" by James McPherson are sharing table space with books about a New York gossip columnist, pagan religion, forensics and the state of Christianity today. Next in the cue are Sue Henry's "Cold Company" and a book by Elmore Leonard. (I told you it was crazy!)

Nah. Lots of people are multi-tasking readers. You enjoy hiking. What's the most wonderful hike you've ever taken?
I hike the Porcupine Mountains State Park in the western Upper Peninsula a few times a year. Last fall, a friend and I did 15 miles the first Saturday in October, and it was perfect! Temperatures in the low 70s, sunny skies, the trees a mass of brilliant reds, golds and oranges. We sat on a bench overlooking a spot known as the Lily Pond and just drank in the scenery and magnificent smell of the woods. I've hiked all over the U.P. including the Pictured Rocks National Lakeshore and a tiny strip of Isle Royale National Park, both of which are beautiful, but this particular day at the Porkies was magical.

You have a business degree and say it comes in handy to "keep track of the pennies" earned by your writing. Have you passed a hundred pennies yet? :)(Let's see ... ten, twenty, thirty, one, two, three ... Looks like I have 33 pennies in the ol' cookie jar. Buy my book, please! Hey, wait a minute! Wasn't I supposed to get paid for all those books I sold last month? I was robbed! Huh, you say I get royalty checks? Twice a year? What kind of operation are they runnin' here?

Reality is hard. :) Did you always want to write?
At various times growing up, I wanted to be a doctor, anthropologist, psychologist (Spenser's girlfriend Susan on "Spenser for Hire" was the coolest), police officer (I was Stacy Sheridan on "T.J. Hooker"), astronaut (too many "Star Trek" reruns) and even a fighter pilot (too much "Top Gun"). Never once did I consider writing, in any way, shape or form, as a career, despite the fact that I spent much of my free time devouring books from the library and earned my best grades in writing-intensive classes. It wasn't until I was a freshman in college that I read a book by a very popular author (no names, please) and a voice in my head said, "You can do this." That voice led me to journalism and the progression to mystery novelist.

What can readers who enjoyed Page One: Hit and Run look forward to in the future? Will this be a series?
My intent all along was to make it a series, and now I have no choice. I've had dozens of people ask me when the next one will be in stores. Thankfully, I'm done with the first draft of Page One: Vanished. Now, if I could just make enough money to quit my *#@% day job and write, write, write!
Posted by Julia Buckley at Tuesday, August 08, 2006

GREAT interview! Thank you, I really enjoyed it. Wendy

Thanks, Wendy! Glad you liked it.

When is the next book coming out? I have enjoyed the three I've read.

I'm glad you enjoyed the Page One trilogy. That series is complete. I do not have another in the works yet because I'm working full-time in academia and completing my master's degree. My hope is that in the next year or so, I can get back to "fun" writing! Thanks for your interest!