INTERVIEW: Why BAHAMARAMA Writer Bob Morris is so Caribbean Cool 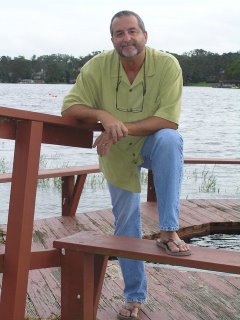 Bob, thanks for answering some questions. Dave Barry called you “funny as hell.” This is a pretty amazing compliment, coming as it does from a Pulitzer-winning humorist. Do you know Mr. Barry?
Dave and I go way, way back. We first met when I was a newspaper columnist for the Orlando Sentinel and was sent out on the road to cover the 1988 presidential campaign. Dave and I were the only humor columnists covering the caucuses, primaries and conventions, which was odd because those things are just totally laughable. While all the serious journalists were listening to speeches, Dave and I would be doing things like getting drunk with Kitty Dukakis or crashing parties for high-rollers or staging mock political protests. At the Democratic Convention in Atlanta in 1992, we put up signs all over the press headquarters notifying all these serious political reporters about a demonstration by a group called “People with Boxes on their Heads.” This group consisted of me, Dave and Eric Lacetus, from the Seattle Times. We put boxes on our heads, stood in the official protest area and dozens of serious journalists showed up to ask us questions like, “What does this protest symbolize?” And we’d answer: “It symbolizes that we are people with boxes on our heads.” We made it on CNN and some of the major newspapers, and when the serious reporters found out they’d been scammed they tried to act indignant, but it was way too late for that.

That is hilarious! That alone will have people running to buy your books.

Your website calls you “a fourth-generation Floridian who forsook the family farm—a fernery . . . “ I haven’t seen that much terrific alliteration since I read “The Raven.” Do you consciously employ literary techniques in your writing?
Well, I consciously regret that one. A bit over the top, eh? Beyond that, the only literary technique I employ is trying to finish what I started.

You named one of your sons Dashiell. Was Hammet a big influence on your writing? How did you happen to choose the mystery genre?
My son’s full name is Dashiell MacDonald Morris, after Mr. Hammett and John D. MacDonald. As a Floridian—and a boat guy and an environmentalist—I’d have to say I was most influenced by MacDonald, especially the Travis McGee series. I’ve always thought Dashiell, shortened to Dash, was a cool name. When my son, who is now 23, came home from his first day at kindergarten, he was crying and said: “You gave me the weirdest name in school.” But he has grown into it.

I decided to write mysteries for two reasons: 1) the form demands that you fully develop both character and plot, and that you have a resolved ending (too many modern novels are flabby in that regard), and 2) you can make more money writing mysteries than literary novels, especially when you don’t have a real job to take up the slack.

At one point in your career you had to shovel chicken droppings in Israel. This is what they mean by “well-rounded.” Have you, by any chance, seen the movie Napoleon Dynamite, and its chicken-farm scene?
Yeah, I lived on a kibbutz for six months and did all kinds of things. My last job was walking the perimeter of the kibbutz carrying an Uzi on night patrol. After that gig was up, the kibbutz leader told me that if I wanted to stay in Israel any longer then I had to join the army. I’m Episcopalian, not Jewish. And besides, I’d had my fill of guns. So I came home. I saw Napoleon Dynamite. He made chicken shit much funnier than it really is…

Your book Bahamarama was nominated for an Edgar in 2005. Were you surprised by the warm response to the book?
Well, the nomination was a surprise because Edgars typically go to darker books with heroes that like to carry guns and sleep around and who have tormented souls and dark secrets. My books aren’t like that. So it was no great surprise that I didn’t actually win for best first novel. I was just proud to be part of the show…

You are also a food critic. How did you end up in this career? Does one need only a love of food and a journalism degree, or is there more to it?
I used to be a newspaper restaurant critic and I still write about food for Bon Appetit and other magazines. Being a restaurant critic is heavy lifting, I could only handle it for a couple of years. My review would have to be submitted on Thursday for Friday’s paper. So every Wednesday I would moan to my wife: “Baby, we have to go out and eat tonight.” It became a chore and that’s when I stopped. But I love to cook. I do all the grocery shopping and cooking at our house…but none of the cleaning. It’s a fair trade.

I’m not much of a drinker, although Johnny Depp makes drinking rum look very appealing. You have advice about how to drink rum. Will you share it with blog readers?
Rum is my favorite drink because every version of it tastes wildly different and you can find local varieties all over the world. My rum collection, which now stands at over a hundred bottles, includes rum that I picked up on travels to Tahiti, Thailand, Vietnam and Australia. The best rum should be taken neat, just like a fine cognac. But on the rocks with a slice of lime is fine, too. And every now and then I will indulge myself in a mojito or the Perfect Rum Drink (the recipe is on www.bobmorris.net)

Tell us about your latest book, Bermuda Schwartz.
Oh, it’s just your typical tale of shipwrecks and lost treasure and money laundering and palm trees and love and a teeny bit of sex and death by icepick and, oh yeah, the search for the True Cross of Our Lord and Savior Jesus Christ. I went to Bermuda a couple of years ago to write a magazine story, then decided it had all the makings of a good place to commit murder and started cobbling together the pieces…comes out in February 2007 from St. Martin’s Minotaur. I’m off next to Trinidad to research the fourth book in the series – TRINIDADDY-O.

Your titles are great! I went to your blog, but couldn’t access the entries. What do you blog about? Your title says, “All Floridada, All the Time.” Is this a blend of Florida and the surrealist movement?
I don’t blog about anything yet. I couldn’t justify blogging while I still owed my editor the ms. For BERMUDA SCHWARTZ. I’m gonna crank it up soon. It’s called “Surrounded on Three Sides” (because Florida is, ya know, a peninsula.) And since it is about Florida it will naturally be surreal. It will also be about food and drink and the Caribbean, but not so much about writing because I think it is boring reading when writers piss and moan about writing…so I suppose it will be more directed to people who read my books rather than other writers.

You are a travel writer and have been to many exotic places which you have used as fodder for your novels. People have compared you to Jimmy Buffet, who is himself portrayed as a sort of modern day pirate, but without the violence and bad hygiene. Do you see yourself as a sort of pirate or rebel?
I’m a freelance writer. We have to be pirates. We have to plunder every likely target or else we’ll starve.

That is very romantic and beautiful. Gentlemen, take notes.

What do your sons think of your multi-faceted writing career? Do they like writing?
They admire the fact that I put them through college by sitting around the house in my underwear. I don’t think either one of them will turn out to be a writer. They are much more sensible than I am…

You founded your own parade in Florida called the Queen Kumquat Sashay. I think this is awesome. What are the qualifications to be in the parade? Can I be in it, for example?
The Queen Kumquat Sashay was founded in 1986 when I was a newspaper columnist. It was the Parade for People Who Would Not Be Permitted in Any Other Parade. We had groups like the World’s Worst Marching Band, and the Tourist Liberation Brigade and the Poor White Trash Powder Blue Shoe Revue and Strutting Nebbish Society. The queen was chosen at random from the crowd, the only qualification being that she had to have red hair (like a kumquat.) Lots of beer was involved. Each year, nearly 100,000 people would turn out to watch it weave its way through downtown O’do. Yes, you could be in it, were it not for the fact that I stopped holding it back in 1997 when I moved to California and haven’t seen fit to jump-start since I’ve returned.

That’s a shame. The only parade I’ve ever been in was when I won the Kiwanis Miss Peanut contest in 1970. Oh, well.

What’s the best meal you’ve ever eaten?
Shrimp and grits with fried green tomatoes and my wife’s cornbread. Had it a couple of weeks ago. Have it regularly. Indeed, just thinking about it, I might have it tonight…

Thanks, Bob, for answering my questions. You are very cool, and your life is fascinating.
Posted by Julia Buckley at Saturday, July 08, 2006

Bob Morris is a terrific writer. Humorous Extremis. Captures the wackiness of Florida and the Caribbean better than any sober scribbler alive. And I wish "Bahamarama" was not taken as a title!
Paul
www.paul-levine.com

Yeah, all of his titles are great.
Nice tux, Paul!

I have a one-year-old nephew named Dashiell, also called Dash. My sister will be so pleased to know that her choice has been validated here!

I think that is a great name! And your nephew will also love the fact that a character in The Incredibles has it, too. :)