REVIEW: How to Seduce a Ghost 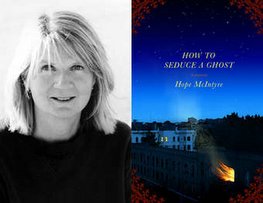 I interviewed Caroline Upcher at the end of June and read her book a few weeks later. How To Seduce a Ghost was a delightful surprise of a mystery with a narrator I will be happy to encounter again.

Lee Bartholomew is a bit of a recluse, even though she has parents and a boyfriend who wishes she would marry him. But she clings to her independence and her solitude and keeps the loveable Tommy at arms' length. Lee knows that she is "different," because unlike the average person, she likes being alone. Opposing this, however, Lee has many neuroses, and her fears make her long for companionship. This basic conflict in her psyche creates tension throughout the book, even before Lee becomes embroiled in a murder. Upcher, writing as Hope McIntyre, makes the reader aware of this in a wonderful first sentence: "When Astrid McKenzie went up in flames at the end of my road I was fast asleep in bed, dreaming of my mother."

Lee's neighborhood is Notting Hill, and Lee, as narrator, acknowledges the link to the movie with wry humor: "The film's mammoth success meant the property prices went through the proverbial roof in Notting Hill. Now anyone with any sense is selling up and buying houses in Shoreditch or Hoxton or even a loft in Exmouth Market." This is typical of Lee's sensible outlook, and yet her fears make her sometimes not sensible at all.

Lee is a ghost writer, and when the story begins she has the chance to ghost for a famous American star in a British soap opera, which can mean good things for her career, one which she takes seriously even as other people question its validity. Things become complicated, though, when she meets the enigmatic Selma and her manager Buzz, who is both sexy and frightening, and creates a major complication in Lee's love life.

In fact, I must confess that I found Lee's romantic problems even more compelling than the mystery (which is compelling enough); it might be due to Lee's rather vulnerable persona, which makes the reader love her even when they question some of her choices. Also loveable is the long-suffering Tommy, Lee's lover, who puts up with her neurosis and her rather distant love for him because he loves her, too.

I found How To Seduce a Ghost fun and interesting, and I had trouble putting it down the few times I was dragged away to make dinner or do dishes or some other mundane thing. I'll be looking forward to Carolyn Upcher's (Hope McIntyre's) next book with great anticipation.
Posted by Julia Buckley at Wednesday, July 26, 2006