The Tomb of Abraham Lincoln 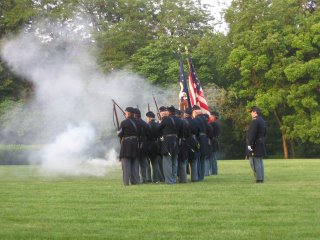 I'm just back from a mini vacation, during which we visited Springfield, Illinois and many sites honoring the great Abraham Lincoln. I wondered what it was that made Lincoln's tomb so much more impressive a place than the Capitol Building which houses the current leaders, including the governor (I asked how often he was there and was told it was classified information; we got to look at his empty office).

I suppose the biggest difference is that Lincoln earned his reputation of greatness in his own time, but has also retained it for more than one hundred and fifty years. Few people, even presidents, can match his legend. And so, in Springfield, it is the aura of history that makes the biggest impression, and the omnipresence of that man who once made it his home. Lincoln's tomb, which we visited to see the honor guard give its 21-gun salute and lower the American flag (as shown in the picture above), was a sacred and beautiful place, and when we were allowed to enter the very chamber that housed his body, and the bodies of his wife and three of his sons (all of whom died tragically young), it was moving beyond description.

I suppose the most appealing thing about Lincoln, to me, was his enduring humility. I'll end here with one of his quotes on that very topic. 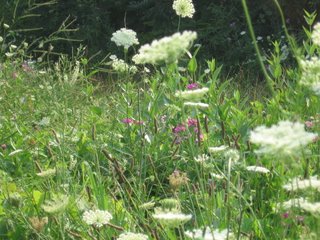 "I have been driven many times upon my knees by the overwhelming conviction that I had nowhere else to go. My own wisdom and that of all about me seemed insufficient for that day."
Lincoln Observed: The Civil War Dispatches of Noah Brooks