On Writing Mysteries and Raising Boys 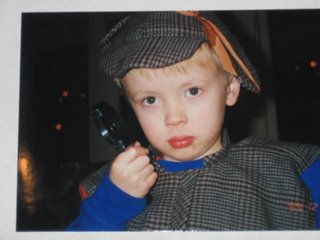 These two things don’t always go together—at least not as smoothly as I’d wish. For one thing, boys will ask for all the attention you have, and then lots of attention beyond that. They want to wrestle dangerously near the coffee table, pick up the cat under his stomach right after he drinks milk, and see what happens when you blow in the dog’s face. (The answer to the last one is—he goes insane and bites your baby lip, whereupon you cry and leave gouts of blood all over the house like you’re auditioning for Macbeth). They want to tattle on each other and jump on the neighbor’s trampoline (blast the neighbor) and argue over one Lego even while they sit in a veritable sea of them, wave upon wave of unwanted Legos that are good only for adults to step on in the dark.

Naturally this does not allow one to sit at the computer for a long, leisurely time, at least not without yelling “Cut it OUT!” at regular intervals, and this rather breaks the concentration. So one must write when one can. And when one is me, that means I write in fits and starts. Not only am I sometimes called away by my boys; there is my mother guilt to contend with. It’s always been there, of course, ever since that first day when I allowed the doctor to circumcise my baby at the hospital and then felt miserable for weeks afterward at what I’d let those evil doctors do. By the time my first infant rolled off the bed while I was hunting for a pair of socks, my guilt was firmly and permanently in place. I called the hospital, weeping harder than the baby, and the doctor asked me in a bored tone if the baby was, perchance, vomiting. No, said I, and he said, “Babies have hard heads.”

Due to guilt, one cannot write all day long, especially not when cute children ask, “Can you read this to me?” You can’t ignore that, not unless you want Harry Chapin singing in the back of your mind all day about cats and cradles and silver spoons. Sometimes you can’t write at all. I’ve had a lovely leisurely summer, but soon I’ll go back to work and night school, which I call Panic Attack Season.

Ironically, though, when one is inundated with non-writer responsibilities, one can develop writer guilt. Similar to mother guilt, it niggles at the back of one’s mind (also, ironically, to the tune of a Harry Chapin song) and asks why there is no new project in the offing and why the old project hasn’t been polished smooth.

So when I lie next to the boys at night and sing them a few lullabies—yes, I do it, but not in as Julie Andrews a way as I’d like—I find that my writer guilt is there, saying ‘Get downstairs and type something.’ But there’s always a boy with insomnia, always, and he’s not that thrilled with the idea of my departure. So I become half sweet lullaby mother, half grumpy military mother who wants to leave. It sounds like this:

ME: (soft and lilting) Oh Danny Boy, the pipes, the pipes are calling—
BOY: How can pipes call?
ME: (not lilting) No talking. From glen to glen, and down the
mountainside . . . PUT YOUR ARMS DOWN! The summer’s gone . . . and all the roses falling . . . ‘tis you, ‘tis you—GET YOUR FEET OFF THE WALL!
BOY: Who farted?
ME: (Not even distantly related to lilting) That’s IT. I’m getting your
father.

And the challenge continues. Not surprisingly, there are children in every book I’ve written so far. I’ve been told I write children very realistically. I guess it’s from being in the mother trenches. Does this help at all with writing mysteries? Well, writers who are parents deal with a daily mystery—how are they ever going to get anythi
Posted by Julia Buckley at Friday, July 28, 2006

Oh I can so relate to this. Except for me it's girls. :) Well and I don't write mysteries. I write book reviews, do artwork and have my own jewelry business. But trying to get anything done is crazy. I'm surprised i ever get anything done at all. And yes the mother guilt is ever present. Not to mention all the other guilt about things to be done...like the laundry guilt, the vacuuming guilt etc. :0

Oh, Andrea, I've almost given up on laundry and vacuuming. :) When I first had a baby, I felt guilty constantly, and my sisters and I started a group called "The Bad Mothers Club" because we always had stories about kids falling, or briefly getting lost, or some other thing we blamed ourselves for. Now that they're a bit older it's a different kind of guilt. But I'm still in the club. Feel free to join. :)

If I want to write, I have to descend into the guilt that is video games. "Here, son, kill eleven million androids. I'll be upstairs on my laptop."

I agree, Bill. I guess we should amend that to "Bad Parents' Club."
And I've used the ol' video bribe way too many times. Still, their brains don't seem to be stagnating yet, and I happen to KNOW my parents did the same thing with junk like Gilligan's Island. :)

I have been trying to get my son to watch Gilligan's Island. TV Land has not cooperated enough lately though.

Well, not to cast aspersions on Gilligan specifically. :) We had a whole slew of shows we watched all in a row, both before and after dinner. We were tv-heads of the first order.

Great post Julia. My only interruptions are the cats and dogs and hubby.

Animals can be quite distracting--the more the animals, the more the distraction! How many are we talking about, total? Do your cats sit on your computer keys?

The kids are in activities, ones that take hours. Competitive gymnastics is good for that. The practices tend to be 3 to 4 hours long.

M.G.--
I recommend activities for the dogs and cats, too. And definitely some for the husband. ;)

At my house, the 3-word phrase of choice is "Knock it off." An easily shouted phrase from any room in the house, not requiring that I have actual firsthand knowledge of what offense may or may not have been committed. There are only three legitimate reasons for my children interrupting me while writing--fire, blood, or vomit. If only it actually worked out that way :)

But it's surprising how OFTEN a boy can have an issue dealing with fire, blood or vomit. :)

Hi, Laura! Nice to see you on the blog.

Hi, Julia! That's why blood and vomit sometimes comes with a caveat . . . I only get up if carpet or upholstery is involved :)

Tee hee. That's a good one; you should write a book of mothering tips. I also knew a woman who only bought red towels so that kids couldn't freak out when they saw their own blood. :)

Yes, they do Julia.

We're talking 3 dogs and 7 cats, 4 of which are kittens. Rebus is lying on my foot as I type.

Aw, that's kind of cute. Although I bet it would be annoying if they deleted an important e-mail or something. :)

You are so right, Eric. And every day they seem a little taller, a little older--like they're preparing to take over the empire. Which I suppose they are.