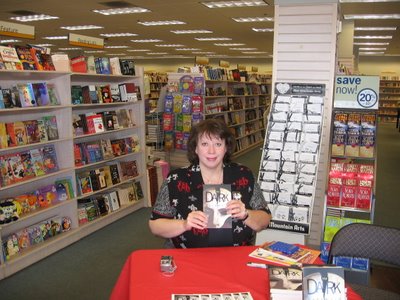 I'm terrible at sales. Once when I was young and desperate for employment, I went on an interview for a sales job; my hotshot 25-year-old interviewer pushed a Bic across the desk and said, "Sell me this pen." I started laughing. That's about how well I've done ever since, so I've avoided sales-type jobs all my life: avoided the pyramid schemes, the Avon or Tupperware or Pampered Chef recruitments, even tried to avoid my own children's school fundraisers.

So now I have the one product I can put some faith in, a product I believe in--my own writing. But even now I can't seem to sell. I don't have the big giant salesman balls it takes to do it.

Today at my signing at Books A Million they kindly and strategically put my table right in front of the door. Sometimes, when a person would walk in, I'd venture, "Do you like mysteries?" in the voice of a shy first grader. And the answer was always, "Sorry, no." After a number of those I lost my will to live. I averted my eyes when people walked in, fearing rejection.

Now I know that all those writer/salesman types would tell me, "You have to grab them right when they walk in the door." But I wonder why? So I can frighten them? So they can get that sickly look people get when they fear they've been confronted by a salesperson, or perhaps a sociopath?

At one point, a little old lady with a babushka on her hair came to sit next to me, explaining that her feet were tired. I had an extra chair, apparently to accomodate the fans who might want to get right up in my face and express their love. Instead, my little babushka friend told me why it's good to read nonfiction. Then she pointed at my book, with its spooky cover, and said, "That looks like UFO's. Is it UFO's?"

"No," I said, sort of regretfully. Maybe if it had been about UFO's it would be selling better. Maybe that was an idea for my next book . . . "No UFO's. Just suspense."

She nodded. "There's too much of that UFO stuff."

Before I left in defeat, I bought a couple of books for my sons. The sympathetic clerk at the register said, "It's pretty dead today. Maybe because it's so nice outside. Plus the 1-3 shift is never very good."

I was tempted to ask why I'd been slotted in the 1-3 shift, but I am not assertive that way. Plus she may well have said that just to make me feel better. So I thanked her and took my purchases and returned to my car with my proverbial tail between my legs.

On the upside of things, I went to pick up my boys at my sister's house (she had generously offered to take them so that I could go sit at Books A Million) and I got to see my niece Pammy in her Halloween-costume-in-the-making: a Renaissance lady. My talented sister is making the dress herself, and Pamela will be quite the OCtober queen, which is doubly important, since her birthday is on October 29.

All hail Queen Pamela! And Julia the lousy salesman sadly slipped into her cave. 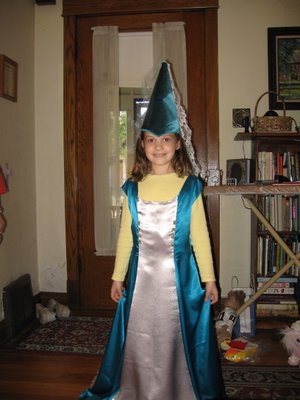 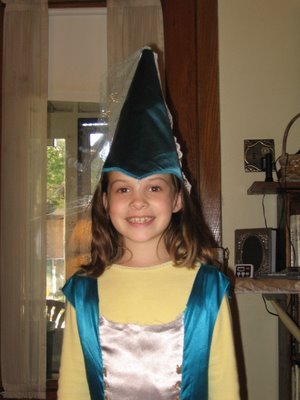 Julia, we've all been there! When I went on book tour, I felt so bad (for the bookseller and myself)that I wasn't selling more books until one of them explained that most of my books were sold before I arrived and they would sell well for a few weeks afterwards. That's how it always goes, according to them. Try the independents. They rock.

yep, happens all the time. i've gotten so i avoid doing signings if there is no in-store excitment. i refuse to hand sell my own book. can't do it. doesn't work for me. booksellers have to 1) be excited about your book 2) create a buzz within the store and get their customers excited. otherwise it's a flop. some stores simply post (obscurely) that you will be there, then wonder why nobody came. this hands-off method only works for brand names, and not always for them.

Well, I'm glad to hear that, Anne, because I've met some writers who do it and probably do it well, but I just can't get into that mode. Maybe we can do non-signings together. :)

I've been loving your Bouchercon coverage, and I can't stand to read you morose. (I'm Caroline's tall red-haired roomie from the reigstration nook). Being one of the great unpublished, I can't completely relate, but as a former sales human, I absolutely do.

One of my published friends recommended to me the following comfort of hilarious and horrible tales. Robin Robertson's MORTIFICATION: Writers' Stories of Their Public Shame includes seventy true stories "of public indignity by some of our finest living writers -- this is a celebration of defeat, and a chance to indulge in that most malicious of pleasures: schadenfreude. You will read about dashed hopes and collapsing bowels, thwarted desire and unimpeded drinking; of fans queuing up for Stephen King's blood; Margaret Drabble bidding at a mock slave auction in Dallas; Louis de Bernières and the S&M prostitute; A. L. Kennedy's disintegrating trousers; William Boyd endorsing Shake 'n' Vac; Margaret Atwood's on-air brush with the Colostomy Association; about an author wanting to kill a member of her audience or another succeeding (accidentally) in killing his host's beloved pet."

Typically perverse of me to think another evil book is the prescription for a disappointing day with your own at the bookstore. However, it was the first thing that occurred to me besides saying there-there and could-be-worse and buck-up and all those platitudes about hanging in for your book's undoubtedly great days to come which sound like sugary crapsicles no matter how I believe in them and you.

Wow! That's some good writing. :)
And my publicist just recommended Mortification, as well, so now I have to look for it, since you have seconded his motion.

You are right in that I should just be happy to be published. And kudos to you for using the words "schadenfreude" and "sugary crapsicles," both of which I love.

Oh, and I still have more B-con photos, including a nice one of you and Julie Hyzy. Send me your e-mail and I'll pass it on! I'm sure I'll use it eventually, but you might like it.

If the publicist says it... My friend told me about it after her first or second book tour. Probably her publicist told her, and it's the preferred hangover remedy for discouraged authors.

I can't take credit for schadenfreude as it was part of the book's blurb, dangit. But sugary crapsicles? That delicate eloquence is all mine. I'd love to see a copy of the pic. E-mail: henway00 (that's zero zero)-AT- yahoo/dot/com