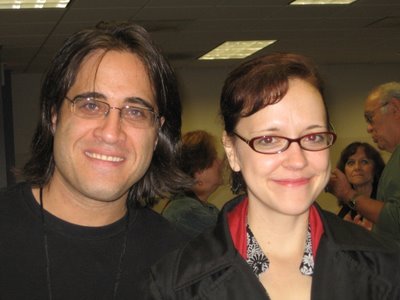 One of my favorite panels was the cozy versus hard boiled, in which the hard boiled writers (Jason Starr and Megan Abbott, pictured, as well as Duane Swierczynski) and the cozy writers (Parnell Hall, Dorothy Cannell, and Leslie O'Kane) had to quickly plot a novel after being given a premise in the genre with which they were less familiar. 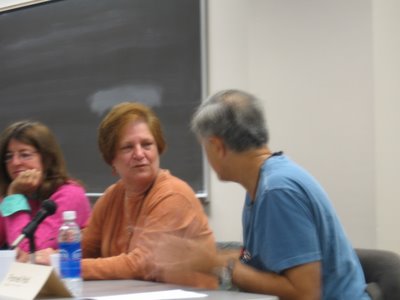 Here Dorothy Cannell and Parnell Hall debate whether or not their hit man will kill his own mother (who they decided was also a hit man). 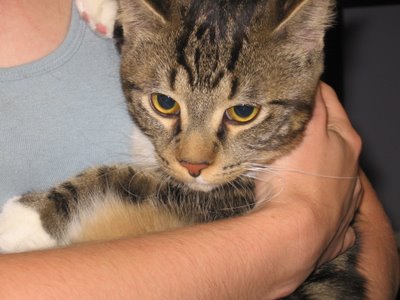 The hard boiled team cheated slightly by bringing in a very cute (and cozy) cat, who won the hearts of the audience, but did not win for the hard-boiled group. It was agreed that the cozy group did the best plotting, although the hard-boiled team provided much hilarious discussion (including the idea that perhaps the cat should be a Vietnam veteran in the hypothetical book). 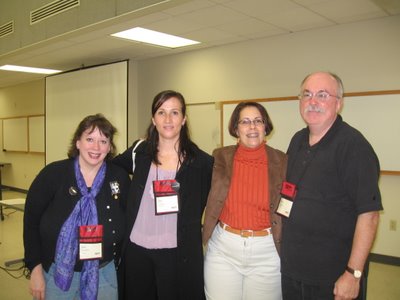 Jess Lourey and I attended a wonderful lecture on forensics by Leslie E. Eisenberg, Ph.D, a forensic anthropologist and archeologist. She was quite delightful, both in her presentation and her discussion with fans afterward. Here she poses with me, Jess, and an old friend of hers who surprised her at the lecture. 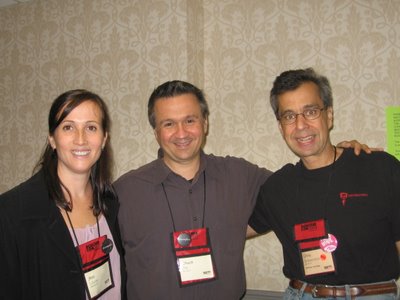 Back at the hotel we ran across Chuck Zito and Chris Grabenstein. Chris won the award for best first mystery later that night for his novel Tilt a Whirl. (And that's Jess Lourey again on the left).
Posted by Julia Buckley at Sunday, October 01, 2006

I'm assuming Parnell won the debate. What a guy!